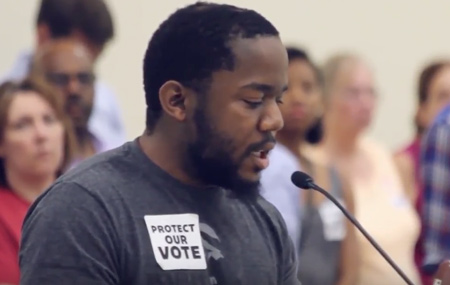 Voting restrictions imposed by the North Carolina General Assembly during the legislative session immediately following President Barack Obama’s reelection have been ruled unconstitutional by a Federal Appeals Court. The unanimous 3 judge panel ruled that the law targeted African American voters with “almost surgical precision” to counteract increased voter participation among communities of color in the state.

Story of America documented the crafting of the law in 2013:

The voting restrictions were waiting in the wings of the North Carolina State Senate during the summer of 2013 as a more moderate House Bill 589 was being crafted. After the Republican majority on the United States Supreme Court ruled that the a key provision of the 1965 Voting Rights Act should be nullified, the state senate added 50 pages of new voting restrictions designed to create long lines in urban centers, and place other burdens on minorities, students, and the poor.  The amended bill was rammed through both houses and signed by Governor Pat McCrory (R) within a matter of days. McCrory later said that he the had signed the bill without reading it.

The Supreme Court’s 5-4 ruling in Shelby v. Holder on June 25, 2013 was an unexpected decree considering the case before them. In Shelby County, Alabama, white lawmakers had redistricted their county board of supervisors in order to eliminate the only African American member. The Department of Justice stepped in, the white lawmakers sued, and Republican operatives joined the suit on behalf of the plaintiffs.

Rather than rule on whether or not race-based redistricting is constitutional, the five conservatives on the Supreme Court ruled that federal regulation overseeing changes to election law in areas with a history of voter suppression needed to be updated for a new, post-racism America. Rather than blocking discriminatory election law changes before they go into effect, the Department of Justice would now have to wait until after the law was implemented, and, prove that it had impacted voters in an unconstitutional manner. North Carolina held elections in 2014 with some of HB 589’s provisions in effect — which means that the current state legislature was elected using illegal voting restrictions.   U.S. Senator Thom Tillis (R), who was also elected in 2014, shepherded the voting restrictions through the General Assembly in 2013 as House Speaker, then benefitted from them the following year as minority voter participation fell off precipitously.

Rev. Dr. William Barber II, president of the North Carolina State Conference of the NAACP, issued a statement just hours after his well-received address at the Democratic National Convention in Philadelphia.

“The Circuit Court’s ruling today is a people’s victory and a victory that sends a message to the nation,” he said. “The court found— under the sensitive inquiry required by law — that how the law was enacted and its impact made crystal clear that discriminatory intent impermissibly motivated this General Assembly. Under our constitution, and under the core principles and dictates of the Voting Rights Act, these provisions have no legitimacy under the law.”

The 4th U.S. Circuit Court of Appeals on Friday overturned North Carolina’s 2013 elections law that included a provision requiring voters to show ID at the polls.

The three-judge panel found that the law was adopted with “discriminatory intent.” The case was sent back to U.S. District Judge Thomas Schroeder, who in April issued a 485-page ruling dismissing all claims in the challenge to the state’s sweeping elections law overhaul.

“In holding that the legislature did not enact the challenged provisions with discriminatory intent, the court seems to have missed the forest in carefully surveying the many trees,” the ruling states. “This failure of perspective led the court to ignore critical facts bearing on legislative intent, including the inextricable link between race and politics in North Carolina.” [Read more]