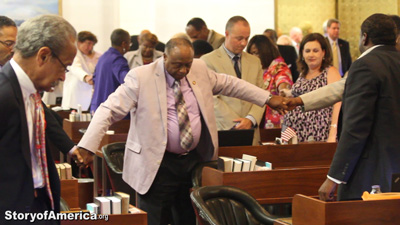 By Story of America Team

Winston-Salem, NC —  Story of America witnessed the North Carolina General Assembly’s passage of what many call the most aggressive voting restrictions since the end of the Jim Crow Era.

A Federal Court challenge to determine the constitutionality of North Carolina’s restrictions may well be headed to the Supreme Court. I spoke with Allison Riggs, lead counsel for the League of Women Voters, which, along with the U.S. Department of Justice and the North Carolina NAACP will argue  that House Bill 589 violates the 14th Amendment to the Constitution, as well as the Voting Rights Act of 1965.

[CLICK HERE TO LISTEN TO PODCAST EXAMINING THE CASE]

In July 2013, just a month after the landmark Shelby v. Holder decision by the US Supreme Court overturned a key provision of the Voting Rights Act — specifically Section 4(b), which prescribed a formula that determined which jurisdictions were subjected to federal preclearance for laws that would impact the rights of minorities to vote. The court decided that “the South has changed” and that jurisdictions that, in 1965, had had histories of discrimination in voting, should no longer be subjected to more oversight than those that did not have such a history. Whereas in the past, laws like North Carolina’s House Bill 589 would have been blocked before implementation, now, voting rights advocates must go to trial to contest laws that impact voting rights, depending on provisions in the Voting Rights Act that were not struck down by the Supreme Court. The opinion stipulated that the striking down of 4(b) “in no way affects the permanent nationwide ban racial discrimination in voting found in Section 2” of the Voting Rights Act.  The trial that begins to day is the most important case to result from Shelby v. Holder.

As Erik Eckholm writes in The New York Times, this case, which will all but certainly end up before the Supreme Court, will “define the scope of voting rights protections across the country in the coming presidential election and beyond.”

Days after South Carolina confronted its past and lowered the Confederate battle flag, North Carolina will grapple with its present-day rules that determine access to the voting booth.

A federal trial opening in Winston-Salem on Monday is meant to determine whether recent, sweeping changes in the state’s election laws discriminate against black voters. These changes were adopted by the Republican-dominated state legislature in 2013, immediately after the United States Supreme Court struck down the heart of the Voting Rights Act of 1965 when it ended a requirement that nine states with histories of discrimination, including North Carolina, get federal approval before altering their election laws. [MORE]

Thousands of people marched through Winston-Salem, NC to express support for voting rights and hope that the federal court trial that began today would set a precedent for 21st century voting rights protections, regardless of demographic shift.  Rev. Dr. William Barber, leader of the Moral Monday movement, spoke at a rally following the first day of the trial.

Allison Riggs and Hans von Spakovsky of the Heritage Foundation were among those who testified at hearings in March of 2013, early in the legislative process. Because the record shows that lawmakers received direct warnings that the voting restrictions they were considering would result in long lines at the polls and other barriers that disproportionately impact people of color, the trial will rest on whether or not this impact was incidental to other goals such as cost savings, or intentional voter suppression.

Riggs also spoke out against HB-589 in July of 2013, along with dozens of other North Carolina residents concerned about equal access to the polls for women, minorities, the elderly, and the poor.